“Westpac has predicted that the Official Cash Rate (OCR) will be cut in August and then in November, bringing it to an all-time low of 1% with the potential of it being cut even further. Westpac chief economist Dominick Stephens says there is also a possibility of the Reserve Bank cutting the OCR in September, depending on how weak the labour market gets. If this happens, there is a chance that the OCR could drop below 1% – a reflection of two years of economic slowdown for New Zealand.“

The bank economists are expecting the Reserve Bank’s interest rates to fall further before the year is out.  Politicians have been publically encouraging banks to follow the Reserve Bank lead and reduce their interest rates, and the last few months have seen many rounds of interest rate reductions by major lenders.  So why have major banks started to offer better interest rates for a two-year fixed term than the interest rates offered for the next twelve months?  The interest rate difference is small, typically only six one-hundredths of 1%, but psychologically important when the casual reader notes 3.79% for two years versus 3.85% for one year.

The answer could be that the banks do not want their mortgage interest rates to drop below the current levels, something which is likely to happen if customers chose to fix for one year in the current interest rate environment as predicted by the banks themselves.

So, now you can chose the lower two-year interest option, or you can do what the banks are discouraging and go for the one year only option and take the likely lower rates next year.  Remember, the interest rate difference typically is only six one-hundredths of 1%, or as my butcher in London used to say “Two-fifths of sod all”.

What am I doing with my mortgage? I am happy renewing my 12 month fixed term arrangement, I see no compelling reason to change.  I do not want to save the tiny marginal cost of a one-year fixed term agreement to give away the opportunity for better cost reductions in a year’s time.

Contact me if you want to discuss for your own particular situation, call or text directly on (027) 4916 977 or to contact us via our online form you can do so by clicking this link https://krwfinance.nz/contact/. 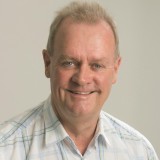 Rob Wilkinson is a local Bay of Plenty mortgage adviser - when he's not out securing loans for happy customers he can be found brewing beer at home in Otumoetai, Tauranga where he lives with his partner Kerry, 4 chickens and 2 beehives.